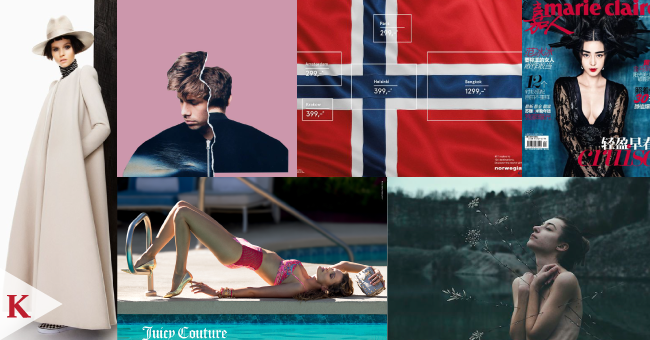 Here are some creative projects that inspire me in January 2015. You can see other projects on my Pinterest or on my #GoodToKnow.

American photographer Mark Harless, known under the nickname Bleeblu, has collaborated with French illustrator Moon who loves drawing women and plants. This is how the series “La Faune et la Flore” is born, showing the model and photographer Molly Strohl in a wild and natural environment. via fubiz.net

As maison et objet‘s ‘designer of the year’ 2015, Nendo unwraps a sweet chocolate lounge on the occasion of the international fair which takes place twice a year in paris. The spatial design of ‘chocolatetexture’ is defined by a forest of 2000 8mm-thick aluminium pipes which have been painted in chocolate-coloured gradations, to create the feeling of being surrounded by a large rippling molten wave of the delectable goodness. Within, a number of the japanese designer’s known pieces for such companies as cappellini, desalto, emeco, glas italia, moroso and offecct, which have been custom-colored to resemble the sweet treat, furnish the lounge and offer a place for maison et objet visitors to take a rest. via designboom.com

MESH is a creative platform that lets you make your own “smart projects” in just minutes. Get an email when your home front door opens. Buzz your co-worker down the hall to go for coffee break. Automatically send someone a goodnight text by just tapping a button next to your bed. Get an auto reminder to bring your umbrella if it’s raining outside. With MESH’s visual design app Canvas and wireless functional Tags, anyone can now invent and build their own projects and “smart things”, and bring more creativity to life at home and at the office.

SAGE – In Between
Ismael Moumin

For his EP release “In Between”, singer SAGE just revealed the clip of the song “In Between”, directed by Ismael Moumin and produced by Frenzy Paris. Dancers Fanny Sage and Julien Thibault, leaded by Julie Bour, are torn and moved at once in a sensual and fragmented choreography, while the singer is divided in two, like a cut paper sheet.

Norwegian Airlines has 417 routes to 126 destinations. All at low, low prices. Norwegian people are extremely proud of their flag. So are Norwegian Airlines of its origin. Nearly as proud as being named Europeâs Best Low Cost Airline two years in a row. So M&C Saatchi Stockholm used âthe flag of flagsâ to create an ad thatâs unmistakably Norwegian and just that little bit rewarding to read. via bestadsontv.com

The gorgeous Egle Tvirbutaite teams up with photographer Luzena Adams @Loveluzena for a fashion story coming from the pages of Elle Bulgaria‘s latest edition. Styling is courtesy of James Rosenthal with hair by Hiro + Mari Watase, makeup by Victor Noble and manicure by Yuki Makishi. via designscene.net